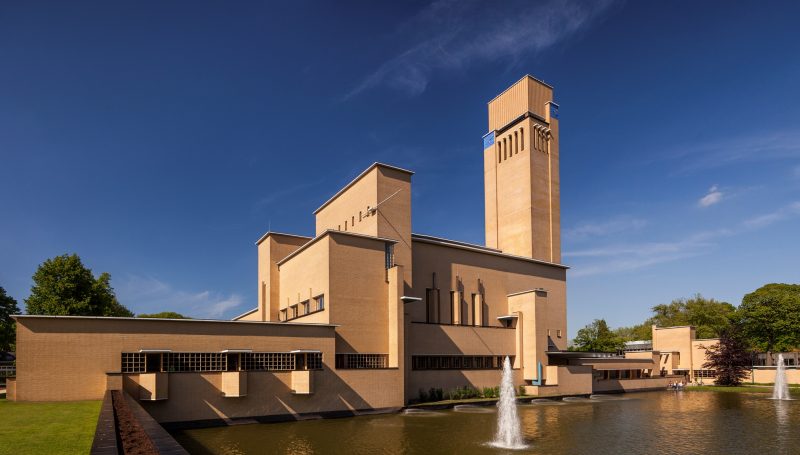 The Town Hall in Hilversum

The Town Hall in Hilversum (1931) is the culmination of Willem Marinus Dudok’s oeuvre. It was built in a park-like setting (a residential area from the end of the 19th century) on the former ‘Den Witten Hull’ estate, which had been purchased by the municipality in 1923. The foundations of the ‘Witten Hull’ mansion, which was demolished to make space for the town hall, are still visible in the basement that nowadays houses the Dudok Architecture Centre.

After taking office in 1915 as Director of Public Works of the municipality of Hilversum, Dudok almost immediately began making plans for a new town hall, but the construction of the final design did not begin until 1928 (after drawing up 10 designs for various locations). Because it was situated on an open site—without building lines or limitations on building height—Dudok was given free rein in his design. The result is a sculptural building consisting of cubist volumes and horizontal facade lines that culminates in a 48-metre-high tower. Watch a video of the opening of the Town Hall in 1931, attended by the Queen’s Commissioner Jhr. Röell, Minister of Water Management P. J. Reymer, and Mayor Lambooy, among others.

Although the concept of a medieval town hall can be seen in the building’s grouping of volumes around two courtyards and the addition of a clock tower, Dudok wanted to evoke a different feeling with his design than the standard symmetrical Renaissance structures do. He created facades that are asymmetrical, imposing and exciting by varying the elevations of the different building volumes. His inspiration came from stylistic characteristics in early 20th-century architecture, but he applied them in such a personal, distinctive way that he surpassed the prevailing ‘trends’ with his design. His fusion of the abstraction of New Objectivity and the adorment of expressionism (better known in the Netherlands as the Amsterdam School) garnered widespread admiration. By using a combination of concrete and steel for the load-bearing structure, Dudok allowed the roof edges and yellow bricks from which the building is constructed to defy the laws of gravity in different places by suggestively making them ‘float’. Moreover, Dudok had a variant kind of brick with an oblong format specially developed for the town hall. In combination with the now famous oblique shadow joints between the bricks, the horizontal lines in the facades are reinforced in a subtle way.

Although the Town Hall seems colossal from the outside, having a rigorous, almost militaristic appearance, the interior is in fact more intimate and colourful in nature. Within each space the ambiance has been carefully adapted to the function for which it was designed, from the use of materials to furnishings, upholstery, decorations, lettering, and door and window fittings. As such, the Town Hall is known as a Gesamtkunstwerk—the hand of the architect can be found in every detail, so it can be experienced as a whole.

The Town Hall underwent a major restoration in the period 1989–1995. Almost all of the original bricks, which had been baked too softly and were porous as a result, had sustained frost damage. These had to be largely replaced with new ones during the restoration. For the interior, the authentic furniture was brought back as much as possible, and all original colours were restored. The unexpectedly costly restoration, due to years of postponing vital maintenance, was carried out under the direction of Van Hoogevest Architects from Amersfoort and awarded the Europa Nostra Award.

Guide Merlyn Middelweerd: ‘The experience begins outside. As you approach the building, you gradually become aware of its ever-changing aspect, observing all those different building volumes that seem to be shifting relative to each other. This “stage effect” is what makes the building so fascinating, and shows the great power of Dudok’s structure.’ Merlyn’s favourite aspect is the main entrance on the pond side, which she can continue to gaze at in wonder. ‘The dramatically cantilevered canopy underneath that high tower is magnificent. The play of lines there is unsurpassed. I advise people who come for a tour to first walk around the building in order to get a good impression. After all, the interior fits beautifully with the exterior.’

Guide Norman Vervat: ‘The wedding room is my favourite space in the town hall, because of its warm appearance. Just look at the beautiful marble, with veins running all the way through it, combined with Dudok’s red chairs.’ On his tours, Norman enjoys talking about Dudok as a watchdog. ‘Until his death, Dudok tried to keep the town hall as he designed it. He resisted unnecessary attacks and interventions, and we can be grateful to him for that. Thanks in part to Dudok the watchdog, the building has been kept intact over the past century.’

Guide Joke Reichardt: ‘My favourite space in the town hall is the B&W meeting room. All of Dudok’s special effects come together in this room, such as the indirect lighting on the wall, the floor covering designed by Dudok, chairs, wall cabinet, the beautiful clock, the marble wall, and of course the magnificent lamp above the conference table. The colour scheme in this space is gorgeous. It’s like being immersed in Dudok. It’s also nice that the portrait of the previous mayor hangs in this room. When a new mayor takes office, the portrait is replaced. I always wondered where those paintings end up, since I only know how to find a few portraits in the town hall.’