In the area known as ‘Over het Spoor’, nothing is what it seems. The district, which formed the heart of industrial Hilversum in the early 20th century, has been expanded, renovated, demolished, modernised, transformed, and in some cases remained unchanged over the years. It is a mix of archetypal Amsterdam School, excellent monument upkeep, progressive urbanism, loose interpretations of Dudok’s work, and the rich history of garden cities. A stroll through the neighbourhood offers insights into the wide variety of concepts regarding housing, restoration, heritage and urban planning from between 1920 and 2020. Led by an experienced guide, you can see how Dudok’s designs have stood the test of time, the activities that have shaped the neighbourhoods, and how many buildings have started a second or even third life since their construction.

Architect W. M. Dudok was employed by the municipality of Hilversum from 1915 to 1953. In addition to the famous Town Hall, he designed several expansions of residential areas, housing complexes, and a large number of schools. In the early years he mostly worked on the Bloemenbuurt in Hilversum South, and from 1921 also in the area of Hilversum Noordoost. Dudok’s urban plan in this district included a number of roads running radially from the station towards the outskirts of the city, which serve as connections between the countryside and the city centre. The houses in this area were designed by Dudok and his contemporaries. Strikingly angular schools punctuate the street plan. A large part of the district has been a protected cityscape for some time. At the beginning of this century a number of so-called ‘Dudok neighbourhoods’ were demolished and rebuilt in the old style. Other dwellings have been restored.

Traces of an industrial past

Beginning in the late 19th century, several large industrial enterprises were located on the east side of the railway. The Nederlandsche Seintoestellen Fabriek (NSF, 1918), for example, manufactured radio devices and radios for ships and aircraft, and developed the first shortwave radio connection with the Dutch East Indies. The NSF was responsible for providing Hilversum with television broadcasts. The Ripolin paint factory and the Ensink iron foundry and machine manufactory (now the site of a Jumbo supermarket) were located in the vicinity of the Larenseweg. The current Lucent site previously belonged to Philips. The cigar factory was designed by architect Bakker in 1909, and a dairy was added in the 1950s. Heavy industry has since disappeared from the area. The former dairy has been repurposed, and a new neighbourhood is being built on the Lucent site. The new Villa Industria district was recently realised on the site of a 19th-century gasworks. 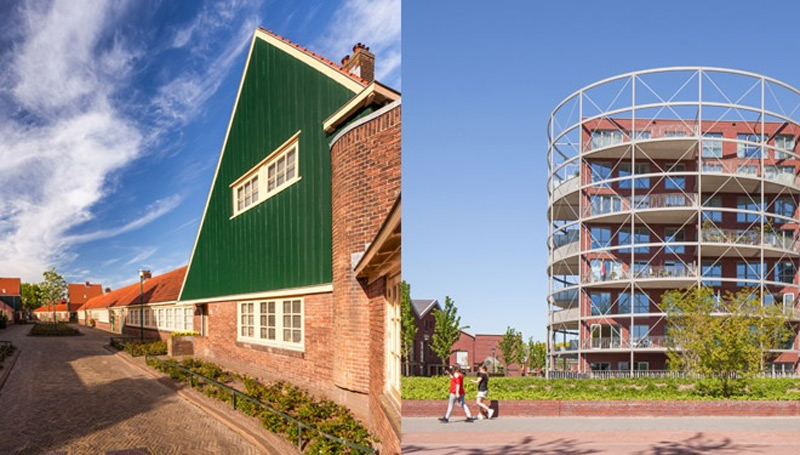 Tour will be in Dutch.

€ 14,- per person Customised architecure walking tours are available too. Costs are € 145,- per group (20 persons maximum). Send an email to info@dudokarchitecuurcentrum.nl to inform about the possibilities and to plan your visit.