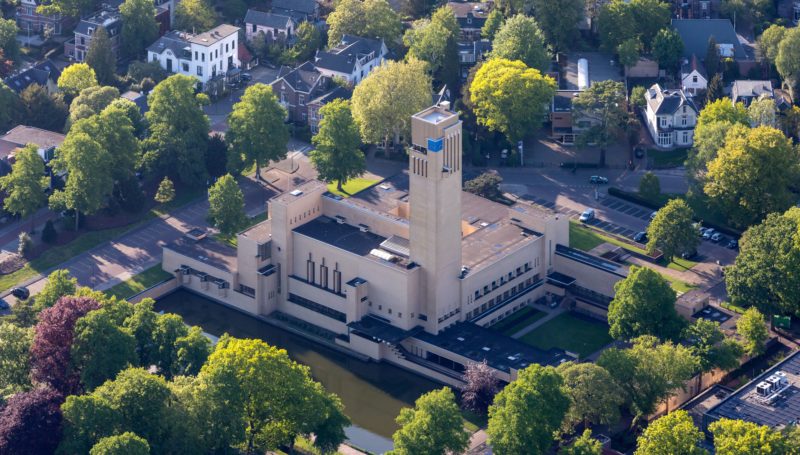 In a time in which the (un) shared city, the impact of architecture on the social life, and the importance of green and sustainability are topical, it makes sense to revisit the work of W.M. Dudok. Now that the phenomenon of the ‘ starchitect ‘- and Dudok was a starchitect in his time – increasingly makes way for collectives that operate in hybrid knowledge fields on an equal footing, it makes sense to look deeper into the networks in which Dudok functioned.

Who were those sources of inspiration? Why did he come to the small village of Hilversum, while work in Leiden and Amsterdam was guaranteed? The Dudok Architecture Centre saw every reason to Dudok. Architecture historian Lara Voerman has with her archival research questions above. The surprising answers shed a new light on the role of Dudok as urbanist on his sources of inspiration outside the architecture (music, anthroposophy, art) and with it on his person and meaning for Netherlands and Hilversum in particular.

The photos by Iwan Baan are a spectacular contra story. Raised in Hilversum, the work of Dudok is, like for many citizens of Hilversum, also a natural backdrop to everyday life for Iwan Baan. People live in a Dudok house, go to school in a Dudok school, get married in the town hall and / or are buried in a Dudok cemetery. His movements through the city, passing by countless unobtrusive buildings by his hand, such as electricity houses, bridges, stairs, a boathouse or a pumping station, further reinforces Dudok’s everyday life.

The street photos that are included in this publication apparently show how these buildings blend into the city unnoticed. They also show the variety of styles, materials and shapes that Dudok used to express function, context and users. Used to experience Dudok’s oeuvre in publications as stately works of art, photographed in optimum light with artistic lines in empty streets, Iwan Baan’s photos feel almost disrespectful. His aerial photos show that that is not justified. All Dudok’s work is – just as he had envisaged – part of a larger plan for Tuinstad Hilversum. Now, about 100 years later, it is visible from the air how the entire Hilversum oeuvre of Dudok, from large to small, is part of an – by the way – ultramodern – garden city concept. This publication shows Dudok again, but differently.

The Thinking behind Urban Development – Gooi and Eemlander February 19, 2020

Traveling through a Land of Wonders – Architect W.M. Dudok on his American Lecture Tour